We are involved in the training of servant leaders for ministry at Institutio Biblibo Rio de la Plata in Buenos Aires, Argentina. The school provides ministerial education for over 400 resident students and over 800 non-resident students who come from all over Argentina and 17 other countries. 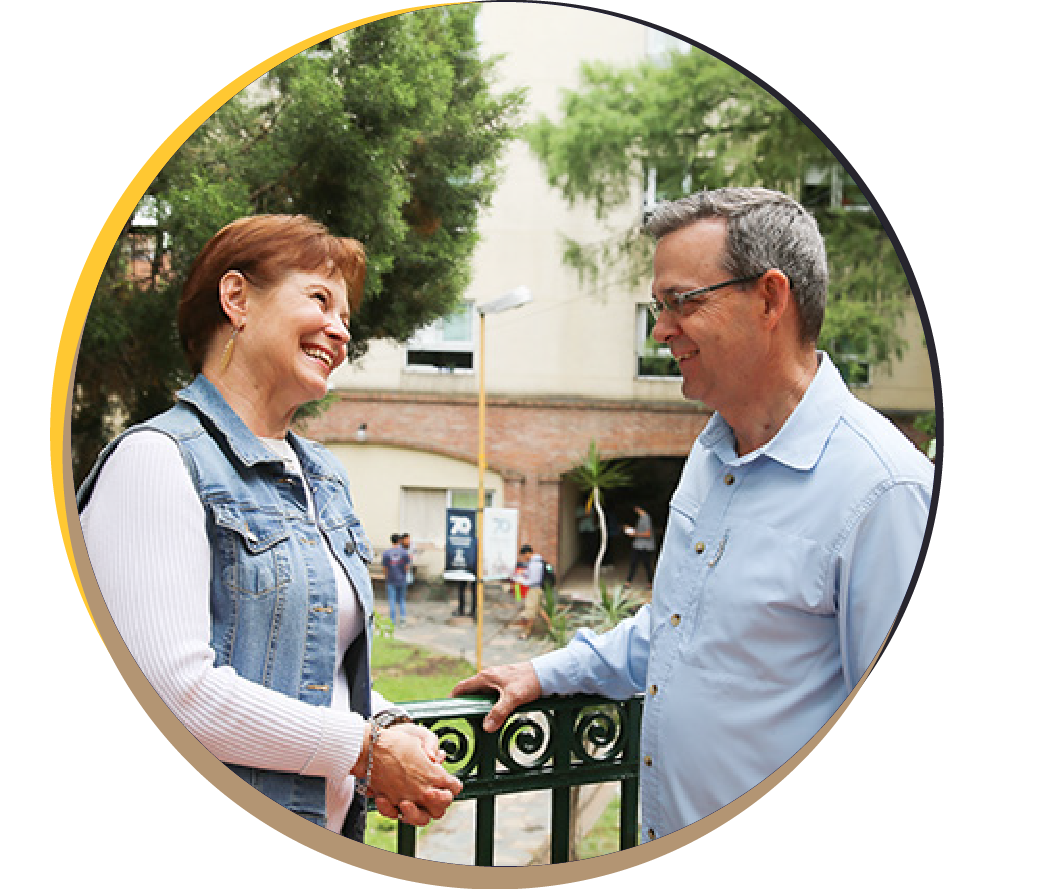 A PLACE THAT IS FULL OF LIFE

A place that is full of life with devotionals, services, classes in the morning, afternoon and in the evenings six days a week, eleven months of the year.

This pandemic took the whole world by surprise, but not God. How do we respond? Let´s pivot and walk with him.” 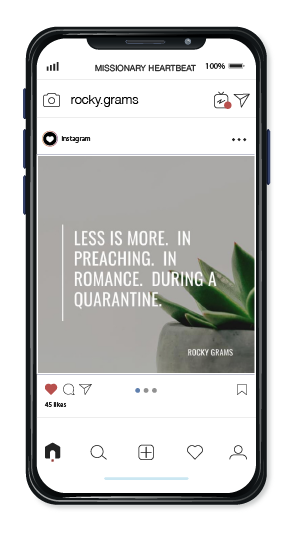 PARTNER WITH US
GIVE A SCHOLARSHIP

IN AWE IN ARGENTINA

Follow the chronicles of testimonies from people in Argentina who are personally experiencing the mighty power and presence of God. People are calling upon the name of the Lord in the midst of their desperation and their prayers are being answered. Grams reveals the lowest of lows and the highest of highs in this collection of heart-warming testimonies.

Rocky Grams grew up on the mission field, and spent sixteen years in Bolivia ministering alongside his parents, assisting in planting churches, distributing literature, ministering to youth, and teaching music and Spanish at a Bible School for Aymara people. He and his wife, Sherry, then were pastors in Wisconsin, and they have continued to connect into the United States regularly with preaching and teaching.

Nothing could prepare us to deal with this type of paradox.
We’re not confused.
We’re in a quandary and uneasy
But very grateful and excited at the same time.
It’s a very good puzzle before us.
How to accompany the move of God
When so many students want to pray
Not only until midnight but into the night or even until dawn.
And it’s not that they are quietly meditating in their seats.
No, they’re praying up a storm of intercession and weeping.
They’re praying in the Spirit.
They’re singing and students praying everywhere.
So what is the problem?
We live in close proximity to many unbelieving neighbors.
We have no chapel—no place that is separate and sound-proof
Where we could worship and sing and pray through the night

The heart of the school is the prayer room.  But only 40 fit in that space and When they pray there, the whole new building reverberates with the waves of
Holy praise and clamor.
Maybe sound proofing it would help.  But over 100 want to pray.
God has led us to empty the basement of the main building of all the items that were stored there:  books and tapes and yearbooks.
We took back the prayer bunker of years past.
The place of tears and deep prayer in the Spirit (Romans 8).
The place of guidance and Holy Spirit dreams.
What to do?
Sound proof that great place?
But only twenty people fit.
Sound proof the provisional chapel.  Not possible.
And what about our classes?
The school has been the cradle of Revival since its inception.
A place where the River flows.
But it is also a place of training in the Word and in practical ministry.
The students must be shaped and molded by the wise and loving Potter
And He’s called us all to participate in that careful process.
It’s a nice problem.
A special problem.
A puzzle that God’s Spirit will help us figure out.
He knows how to balance things.
He holds the whole univers in perfect order.
But revivals are explosions and times of surprising but limited chaos.
What to do?
What did they do the day of Pentecost?
Peter, led of God, took the time to explain it
And three thousand joined the happy family on that day.
I’ll take a little chaos and perplexity any time.
Yes, any time.

Connect with the Lost

Left church today during worship to retrieve my cell phone from the car.
Máxima, one of the greeters, suggested I just leave it in the car.
«Don’t want it to be stolen,» was my reply.
Since the church doesn’t have a parking lot,
We have to park on the street.
As I was walking in to church, I glanced sidewise and noticed
A transvestite sitting on the bus stop bench not 50 feet from the church door.
I sat down in the middle of the bench, four feet from him.
«You over there, and I am here!» he stated emphatically due to the effect of the alcohol.
He had dreadlocks dyed red on the ends and was wearing a bra.
His fingernails were painted light blue.
His eye makeup was pretty good and he was sucking on a lollipop.
In his hand was a bag with a large bottle of beer.
So I moved way down to the end.
«I’m thirty three.  The age of Jesus Christ,» he announced loudly.
«Here, let me show you how I eat this lollipop.
Only I can do it this way, and it is my way.»
He went on, «I’m umbandista (a voodoo cult) to the end.
And the most powerful is Oshalá.»
I asked his permission to present four questions to him.
«Sure!  All you want.»
In the meantime, seven people had arrived at the bus stop and were standing nearby, trying to act like they were not tuning in to the very colorful conversation.
«What is the word or phrase you have for this year?»
He was too drunk to grasp the question.
«What bothers you?»
I struck out again.
«What hurts you?»
Now he was beginning to listen.
«One more.»
«When you stand at the door of Heaven and Jesus Christ asks you why He should let you into His Heaven, what will you answer?»*
Three street sweepers walked up and started working near us, taking pictures of each other with their cell phones and looking at us a little bemused.
«Here!  Take my picture!» he said and started posing for them.
«Too bad you have to work on Sunday sweeping up, right?» I said to them.
«But it’s because of all the garbage that is left strewn around after Saturday night, right?»
The word «garbage» got my friend’s attention, and he went into motion, suggesting in a loud voice that they keep doing their work and sweep up all the garbage.
They laughed and moved on.
Then I said to him, «Varón!»
«No soy varón; soy mujer.»
I’m not a man; I’m a woman.
«You used to study the Word in Sunday School, right?  And someone hurt you deeply.»
I started praying out loud
That God would show him how much he values and loves him.
«Camila» had moved beyond the center of the bench in my direction and was sitting not three feet away.
Two buses had stopped and gone on.
We had been conversing for about twenty minutes.
As he talked, once in a while he would spray alcohol in my face.
But it was totally fine.
What was he saying?  «There is only one Jesus Christ.»  Wow.
And then, the word slipped out.  He called him Lord.
I knew he had been in church, somewhere way back before all the pain.
He had called Him Lord!
I excused myself and went back into the church service.
Two of the larger men of our church had been standing close by, just in case…
I walked in just in time for communion.
But my mind and my heart were out on that bus stop bench.
What if we trained and sent ten people per Sunday out of the service to go find a few hurting people?
What if we spent twenty minutes just listening to someone?
We would miss part of the service.
But we would have a chance to approach people and hear their hearts.
Great church growth method–very novel.
Connect with the Lost
Before it’s too late.

What happens when there is a strong influence to cut loose from the moorings?
What happens when some decide that the root system is useless?
That the foundation is optional?
What happens when self-proclaimed theologians
Decide they know more than their teachers?
A friend’s church was split recently by modern day proponents
Of a return to the Law with all its trappings.
They’ve held this brand new posture for three months
And have not studied or understood Galatians or Hebrews—
Written twenty centuries ago.
Some think that today and the future eclipse everything else.
It’s a mindset of the times.
“We don’t want what the church had in the past,” they say.
“We’re going for a new paradigm shift in everything. “
John didn’t think he invented the truth.
He just reported “what we have seen and heard  and touched”
Concerning the Truth—a Person—our Lord.
The One who said:  “If you’re thirsty, come to Me and drink.”
The One who satisfies.
How fragile is the Church?
When the chain that went from Jesus to John to Polycarp to Irenaeus
And stayed unbroken on through to Jonathan Edwards, John Wesley
And Aimee Carmichael and Maria Woodworth-Etter
And Carlos Annacondia and Dante Gebel
And Loren and Millie Triplett
And Monroe and Betty Jane Grams and Dick and Cynthia Nicholson.
When that chain becomes obsolete and is broken, then we are lost.
Like a ship with no rudder or anchor.  Like a cell with fractured DNA.
We become irrelevant if we decide that the center is
To be just as smart or smarter  than those who are wandering around clue-less out in the cold of night.
How do we approach the one who thinks that he is wiser than his mentors?
The one who teaches others to doubt and to reject the altar?
We approach him with firm and careful love.
At times called tough love.
Full of grace
But also full of truth.
We will not compromise.
We’ll continue to believe the Apostles’ doctrine and practice
And vivid experience.
Don’t think we’ll get a lot of slaps on the back
From the pundits of today.
But we’ll just keep striving for the only praise that will count.
The “Well done” we’ll hear up there
From the One who answers and  satisfies all.
The One who will make sure
That the chain is intact right up to the trumpet call.

“I loved reading this, especially because I have met Rocky Grams and his wife personally. I visited the Bible school where he works/ministers in Argentina years ago, and saw a little bit of this first hand. It is amazing the positive changes that God can bring about... I hightly recommend this book.”
StarsInBaja
family of five
“Inspiring read. Not a how to, but challenges you to want more of what God has for us. It doesn't happen overnight, persistence, patience, wisdom & discernment. All this you can get from this book.”
JIM OPGENORTH
Highly Recommended
“A powerful book that takes you into the beginnings and continues with the revival in Argentina.”
Kenneth Draughon
A must read for the student of revival!